In 2008, Florida Statutes 61.13 created the requirement of  “Parenting Plans” in matters involving children.  The “Parenting Plan” is a required separate document in matters involving children that sets out in great detail the parties’ timesharing with the minor child, including pick-up and drop off times, locations, as well as detailed holiday timesharing.  The parenting plan also touches on aspects of communication between the parties and with the children, decision-making regarding the child, and how uncovered medical expenses are to be covered.  The detailed plan was created to force parents to make decisions regarding issues of their children without the necessity of Court intervention at a later date.  However, if the parties cannot reach an agreed-to resolution on aspects of the parenting plan, the Family Law Court will decide your parenting plan for you.

In dissolution of marriage cases involving minor children, the most important matter for the court is parenting.  The Court has a duty to protect the well being and best interests of the minor children above all else.  There has been an obvious evolution of thinking regarding the treatment of timesharing with minor children over the years.  Many clients will come in using terms which we simply do not use in the State of Florida for these matters anymore including “full custody”, “custody”, “visitation” and “primary parent.”

It was not too long ago that timesharing between parents was dealt with in a very cursory nature.  Most final judgments of dissolution or mediated settlement agreements would simply make one parent, usually the mother, the primary residential parent and allow the other parent “free and liberal timesharing.”  Other times it was a bit more detailed, creating an actual timesharing schedule such as the very common, at least for then, “every other weekend and Wednesday night” schedule.

However, these vague arrangements would often result in additional litigation where parties sought clarification or modification.

In 2008, Florida Statutes 61.13 created the requirement of  “Parenting Plans.”  The “Parenting Plan” is a required separate document that lays out in great detail the parties’ timesharing with the minor child as well as rights and responsibilities regarding the child.  The statute also did away with the term “primary residential parent.”

Almost immediately after the statute went into effect, many judges began awarding equal (50/50) timesharing where, just prior to the statutory amendment, equal was essentially an anomaly.  For two years many family law judges mistakenly believed that Florida Statutes 61.13, and the removal of the term “primary residential parent” had created a presumption that timesharing should be equal unless there was a good reason to do otherwise.

It was not until 2010 that the appellate courts corrected this behavior, stating that there was no presumption for any particular type of timesharing and that all cases should be dealt with on a case by case manner with the focus being the best interests of the child.

However, it is fairly clear that it is more likely now, than it was prior to 2008, that a family law judge will order equal timesharing if the parties’ respective work schedules and proximity to one another can facilitate such timesharing in the bet interests of the child.  When determining what timesharing should be ordered, the trial court will look at the following factors: 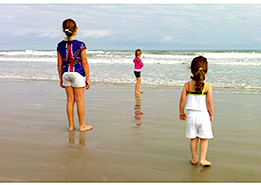